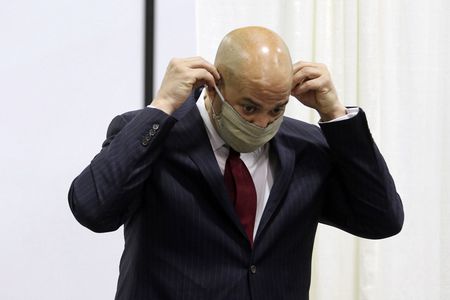 "To put it simply, there is just no way we could make it through this pandemic without (EMS responders)," he said. But Booker conceded verbal bouquets are not what EMS responders need right now. They need financial support, he said. "We have an obligation as lawmakers to make sure investments are being made so that our brave EMTs and paramedics, who are working around the clock literally and are putting their bodies at risk, are protected and supported," Booker said during an hour-long conference call aimed at identifying funding priorities for EMTs and paramedics during the COVID-19 pandemic. "That's my focus as we come to more of these federal packages."

Booker on Tuesday co-sponsored bipartisan legislation that would ensure families of first responders who die from COVID-19 complications won't face unnecessary hurdles to benefits. The Safeguarding America's First Responders Act would establish a temporary presumption that COVID-19 infections will be considered to be contracted while on duty if diagnosed within 45 days of an officer's last shift. At least 13 EMS responders across the state have died as a result of the coronavirus since March 31, Michael Bascom, the chief of the NJ EMS Task Force, said Friday. And hundreds of other EMS officers remain sick with COVID-19 symptoms, according to Bascom, who acknowledged that New Jersey's rescue squads have been pressed into duty like never before.

"After eight weeks of working with an unprecedented call volume and dealing with higher levels of stress, things have become more manageable,'' he said. " But it's still hectic.'' It's why emergency responders who joined Bascom on the conference call urged lawmakers to take action by providing financial relief. "I'm so very proud of all the work being done by all of our EMS community and I think they all need to be recognized for the sacrifices that they're making,'' said Barbara Platt, president of the EMS Council of New Jersey, said. Bascom lauded Booker for introducing the legislation aimed at supporting the EMTs who have died during the line of duty. But he said more needs to be done and asked the New Jersey lawmaker to guarantee active EMS professionals a 12-week stipend of $600-per-week in the next federal stimulus package.

"This isn't a charity or a handout,'' he said. "This is something that's been more than earned during this crisis where paramedics and EMTs are being called upon like never seen before. It's going to be a fight (in Washington). But I don't see how any (lawmakers) could deny hazard pay." While there are a total of 439 EMS agencies in New Jersey, nearly 240 are comprised of all volunteers, state officials told NJ Advance Media last month. The number of COVID-19 cases within their ranks — and concern for older volunteers with underlying medical conditions — has led to some squads opting to temporarily drop service. Bascom said the strain on the EMS community highlights the need to make the responders "as relevant'' as police officers and firefighters.

"This is an identity crisis that has led to our struggles to recruit and maintain EMS professionals, to properly support those who die in the line of duty and to provide the funding necessary to ensure that we are properly trained and equipped to provide the pre-hospital healthcare that most people have come to expect," Bascom added. Booker said he is "in awe" at the grueling hours and sacrifices turned in by EMS responders, calling the coronavirus pandemic "our nation's great challenge." "The people that are running on the frontlines are emergency medical technicians and paramedics," he said. "They show up every day, meet the challenge under more difficult circumstances during this pandemic. Many are making sacrifices that go through all of your families who are sacrificing for this cause as well."

Booker pointed out that his chief of staff, Matt Klapper, is a volunteer member of a rescue squad in Springfield, Union County, and called the lack of federal funding aimed toward EMS volunteers "unacceptable." The $2 trillion stimulus package in March included provisions earmarked toward EMS squads, including $45 billion for the Disaster Relief Fund and $16 billion to replenish the federal stockpile of PPE and medications. But the National Association of Emergency Medical Technicians said the federal grants didn't "trickle down to EMS.'' In addition to direct funding to EMS agencies, the advocacy group demanded priority access to COVID-19 testing and reimbursements for childcare.

For his part, Booker called direct payments to EMS agencies his "next priority."

"The reality is police and fire get a lot of focus and a lot of special grants directed towards them," Booker said. "I just think it's time that we do something for EMS and that they're treated fairly and frankly relative to the other agencies I just mentioned. For the work that you do, the lives that you save, it's absurd that there's not more directed streams of resources."

Opinion: Don't leave EMS behind in virus recover
These are the most dangerous jobs you can have in ...