​As New York City Battles the COVID-19 Pandemic, Many Among the Campus Community Have Leapt Into Action 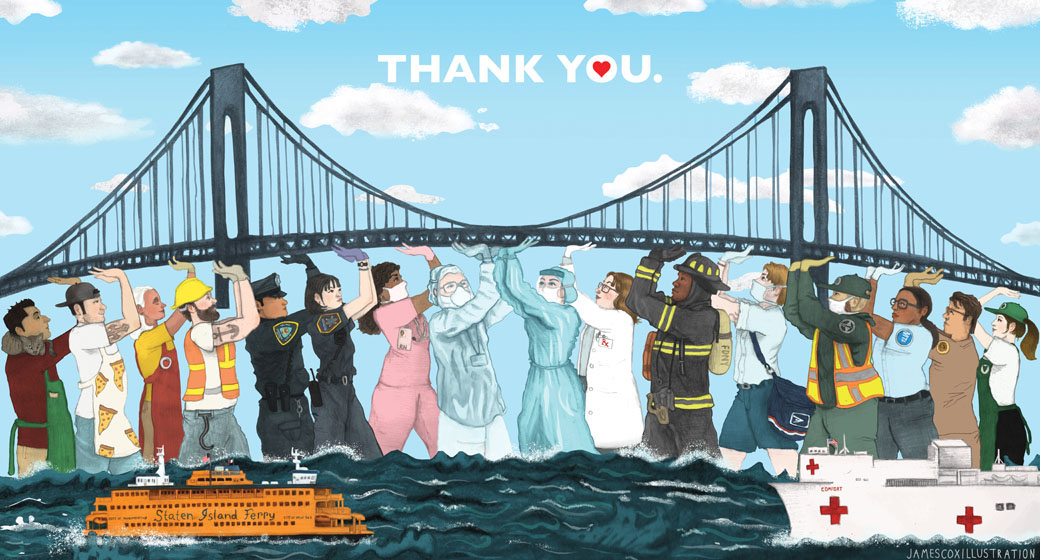 ​The COVID-19 crisis has prompted various responses from members of the Brooklyn College community. For many of our staff, faculty, students, and alumni, that response has meant running to the front lines or rushing to assist or support those who go there every day. Either way, the college has had a big imprint on the efforts to stop the spread of the virus and to aid the sick and the healers in a city that has become the epicenter of the pandemic. 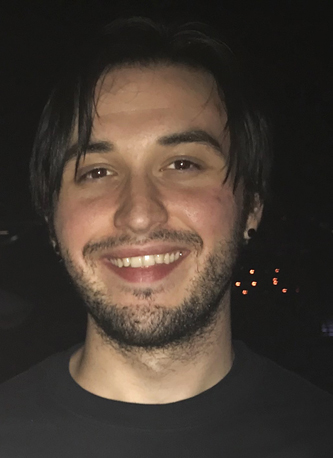 ​James Cox was headed to pick up a pizza one March night, early into the New York State on PAUSE executive order, when he thought about all the essential workers who were keeping the city running and that it would be cathartic to paint something inspired by them. He said he knew a lot of fellow artists who were feeling the "melancholy of self isolation." He wanted to create something optimistic, a visual representation of what he was feeling: gratitude. He came home, ate his pizza, and got to it. In less than a week, he had finished his piece, a pencil drawing that he scanned into his computer and colored digitally that features healthcare workers, first responders, restaurant workers, and others holding up the Verrazzano-Narrows Bridge. Cox posted it on his personal Facebook page and his Instagram followed mostly by a modest number of family and friends and "it just shot off into the stratosphere," he says. He had nearly 700 shares and 2,000 likes in just a few days. Everyone was asking for prints. He figured if he was going to sell it, the proceeds should go to a charity. He ended up working with Staten Island Borough President James Oddo to create a run of limited-edition prints and posters and is searching for a local nonprofit that is assisting frontline workers in getting personal protection equipment and other needs.

"My mother is a nurse. I have a lot of other close friends who work in healthcare. I live near Richmond University Medical Center and hear the sirens all day," he says. "I couldn't be on the frontlines, so this was my way of saying thanks for holding us up." 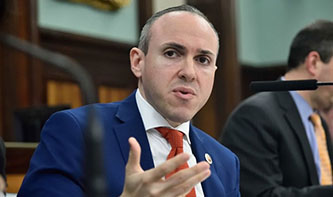 Weeks before the city went on lockdown, the chair of the Committee on Education of the New York City Council, Mark Treyger, was one of the most persistent voices in the debate over whether to close the public schools. Treyger, who majored in political science as an undergraduate and received master's degrees in social studies education and school leadership, was adamant that shutting down the K–12 system was necessary in order to flatten the curve of the pandemic. Eventually, most of his proposals—to close the schools for instruction while leaving a few buildings open in each district to provide essential services like meals—were adopted when Mayor Bill de Blasio announced school closures in mid-March.Treyger went on to advocate for all meal-access sites, which are mostly housed in the schools, to serve kosher and halal meals, and for the city's Department of Education to release the number of employees who died from COVID-19.

"My education family is a family of frontline heroes. Some have died in this country protecting their students and are first responders to many of the social and emotional challenges their students and families face," he tweeted in April. "We must always have your back." 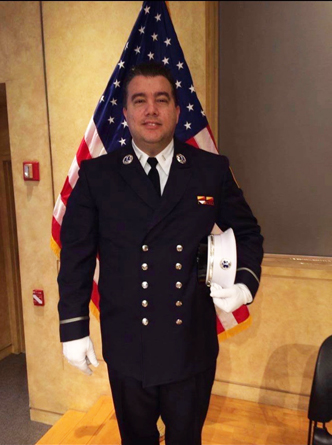 ​As the outbreak continues, New York's Emergency Medical Service is receiving more than 7,000 calls per day. Anthony Almojera, a New York City Fire Department EMS lieutenant-paramedic has taken the spring semester off and is working 16-hour shifts six to seven days a week. As the vice president of the Fire Department's EMS union, he is also taking press calls to advocate for his officers, and to describe the horrors they are experiencing. Almojera feels it is important to take time to praise the heroics he sees, like the EMS workers who had become infected with COVID-19, recovered, and then went right back out into the field. And the ones who were angry they caught the virus, mainly because it meant they could not be out working. He also often tells the story of how in 17 years on the job, he has never felt so helpless.

"We feel like we have failed when we can't save a patient," says Almojera. "One of the ways we deal with that is to comfort the family members. They cry and we put our arms around them. But in the age of corona, I have to keep my distance. The grief transfer can't take place from six feet away; all I can do is say I'm sorry. Then I need another way to get it out—that's when I would go out to my truck and cry." 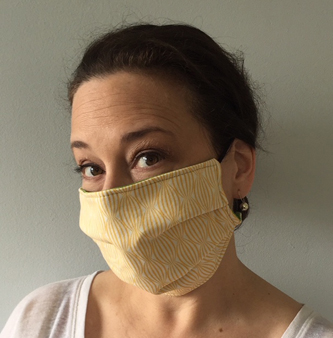 Deborah Hertzberg works closely with the costume-design students in the Department of Theater. When the faculty and staff started hearing rumblings about a shortage of personal protection equipment for healthcare workers, the most natural thing for them to do was to enlist a crew of students they knew had sewing machines at home. They were going to make masks. They sourced art stores for free fabric and got another $500 from School of Visual, Media and Performing Arts Dean Maria Ann Conelli for supplies, and then looked into how to distribute their wares to local fire stations, emergency medical services workers, and hospitals and nursing homes. They also made masks for the college's essential workers. Two students in the master's degree program in costume design—Sarah Knauss and Xindi Xu—signed up to help. They were joined by Professor Emerita Rebecca Cunningham, Wardrobe Supervisor Christine Barringer, and former costume design student Kathryn Squitieri '09.

"We had to contribute," says Hertzberg, who also serves as the shop supervisor for the theater. "Even though we focus on making costumes for theater production, our skills are useful right now in this time of emergency. It was a no-brainer." 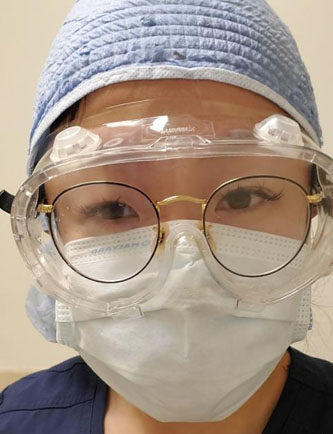 Rosanna Hui tries her best not to read the news in between her 12-hour shifts as a nurse practitioner in the emergency department at a Brooklyn hospital. She doesn't want to keep up with the death toll. Not really. The deaths she witnesses firsthand have already taken their toll on the former health sciences major. "Someone would look fine one minute and then next thing you know they collapse right in front of you," she says. Her worst day came when she had to go to the hospital's makeshift morgue. "I opened the tent and for the first time realized how far it expanded," says Hui. "There were just so many bodies. It was traumatizing."

Despite her anguish, and fears for her own health and safety, Hui says she couldn't imagine being anywhere else. "I would feel useless if I wasn't here," she says, adding that she was sleeping on the floor so as not to infect her boyfriend and staying away from her aging parents. "Society needs us. Who else is going to take care of everyone?"

To help support the brave men and women of the FDNY Emergency Medical Service, as they fight to save lives during the COVID 19 Pandemic, click the link below: